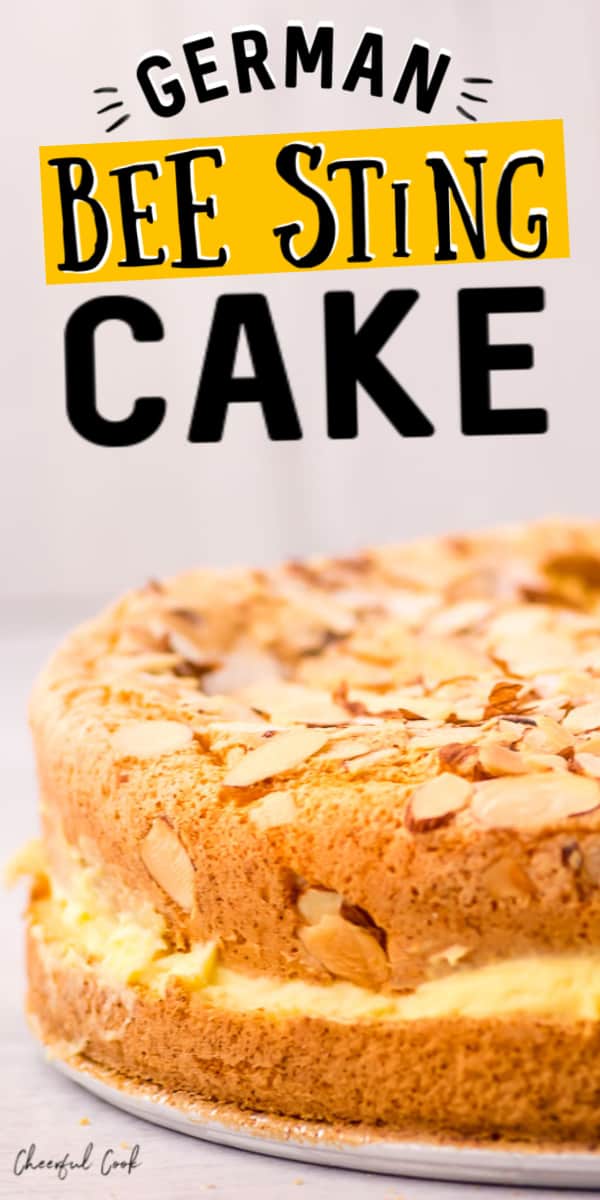 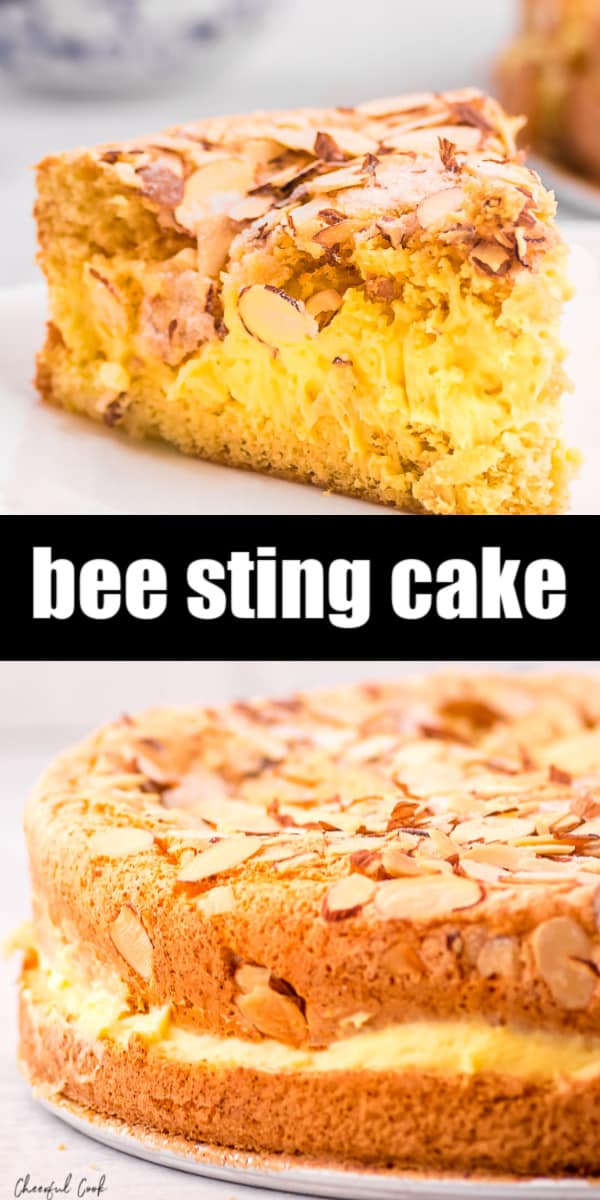 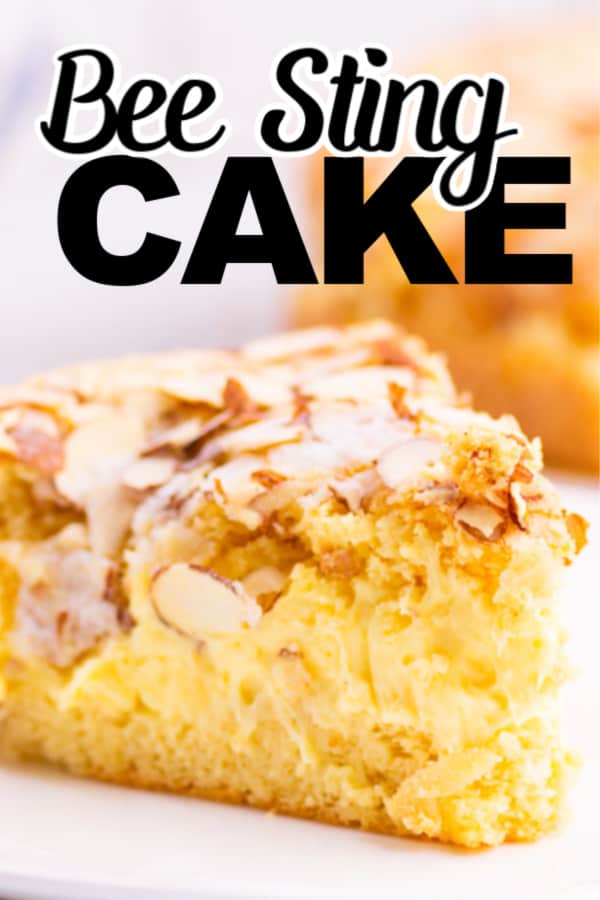 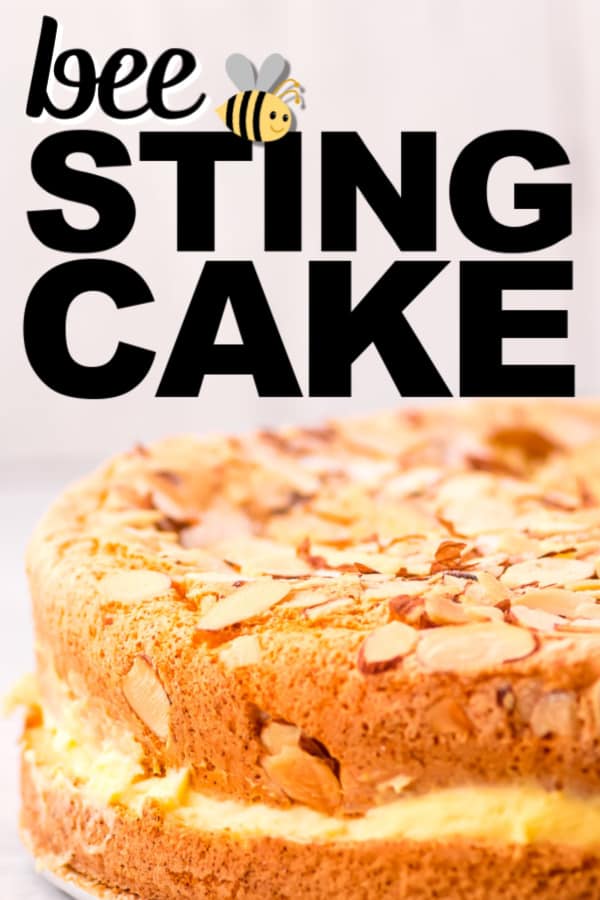 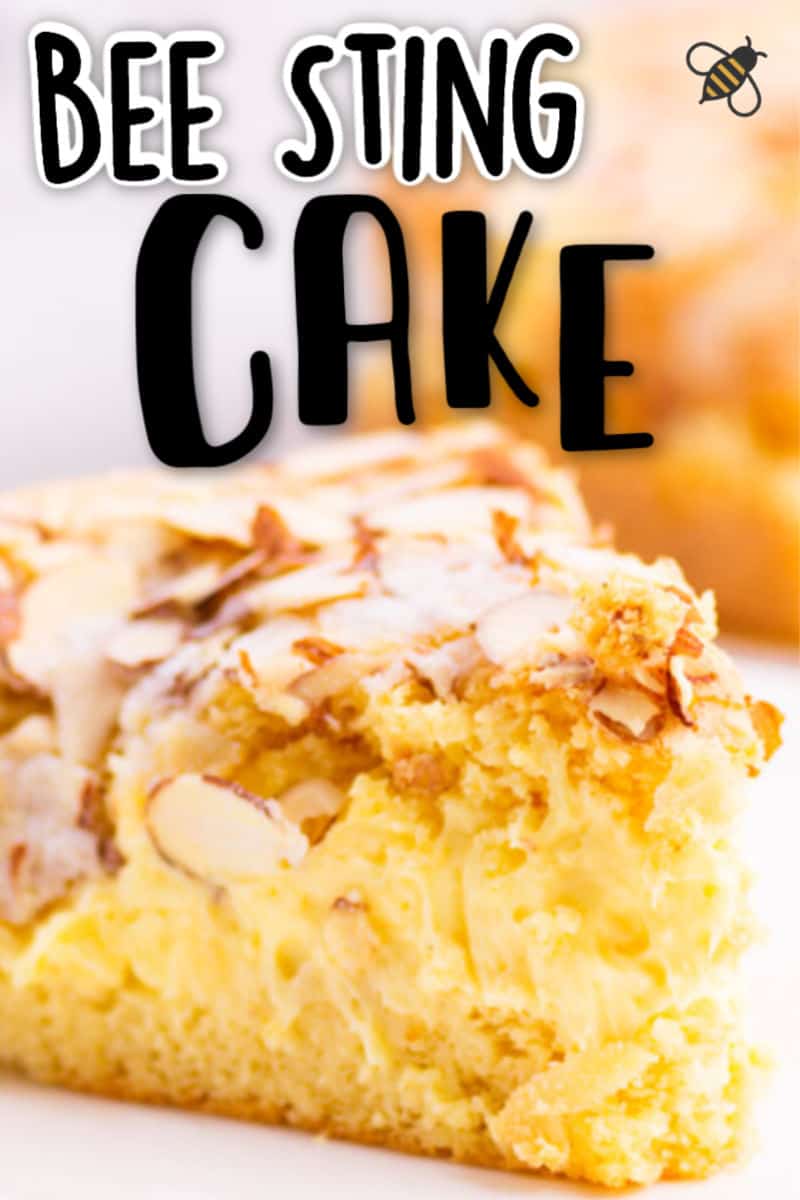 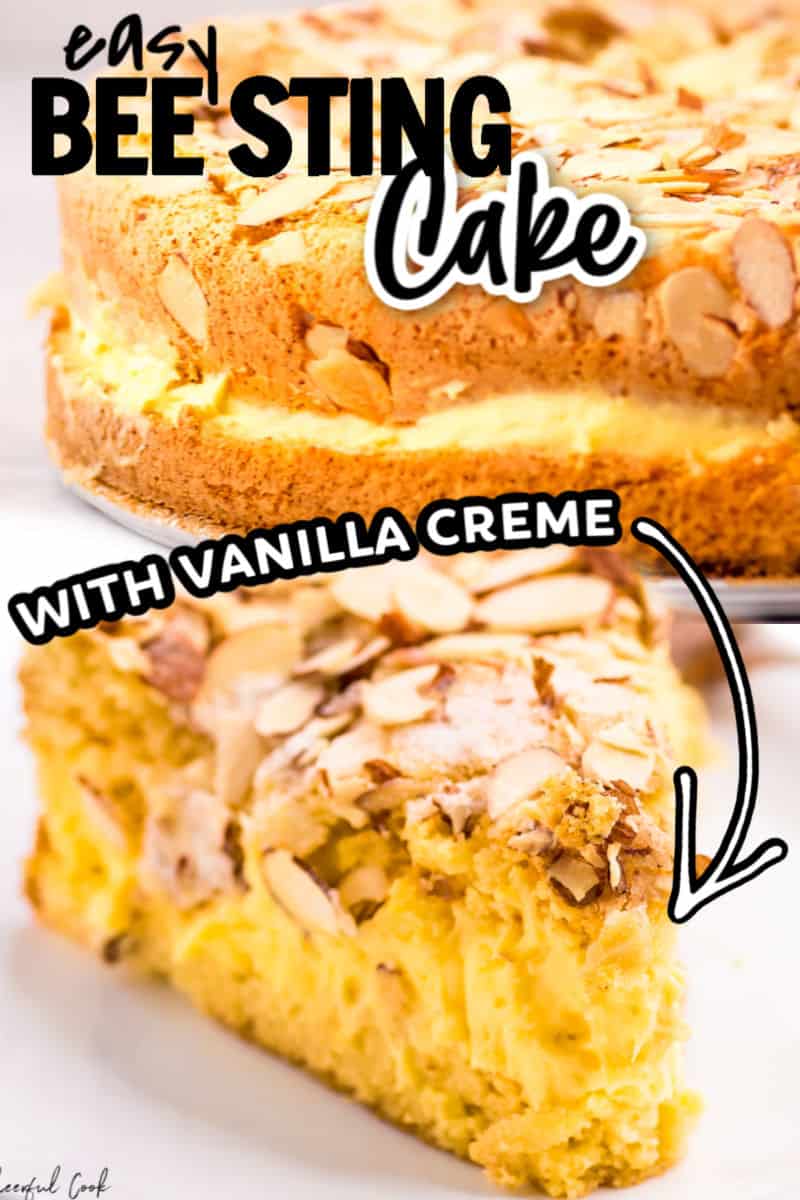 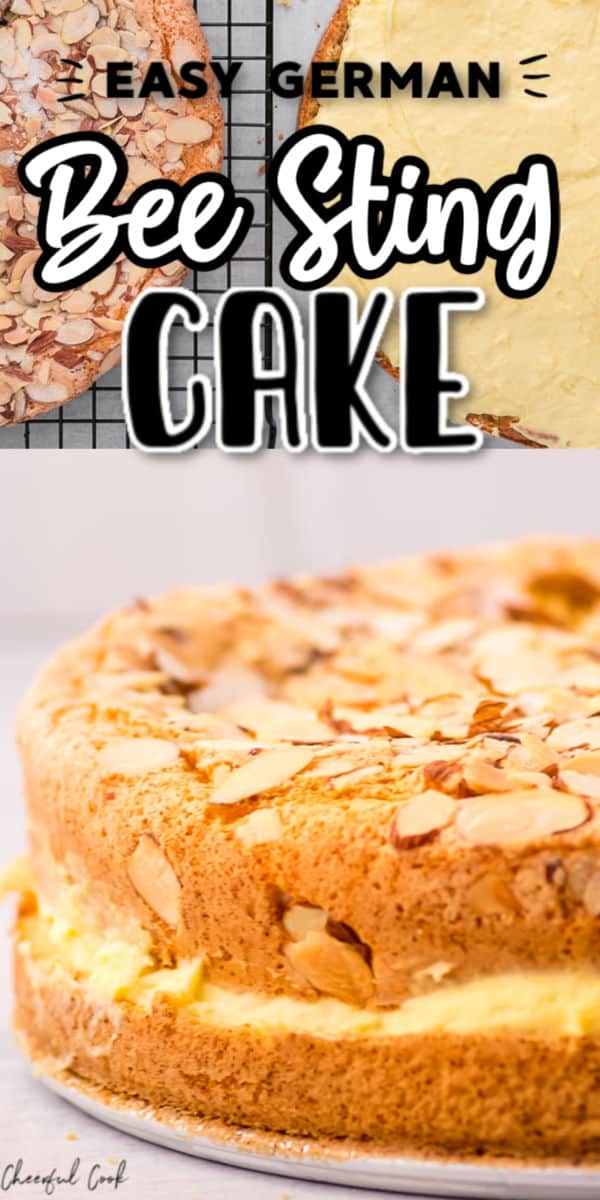 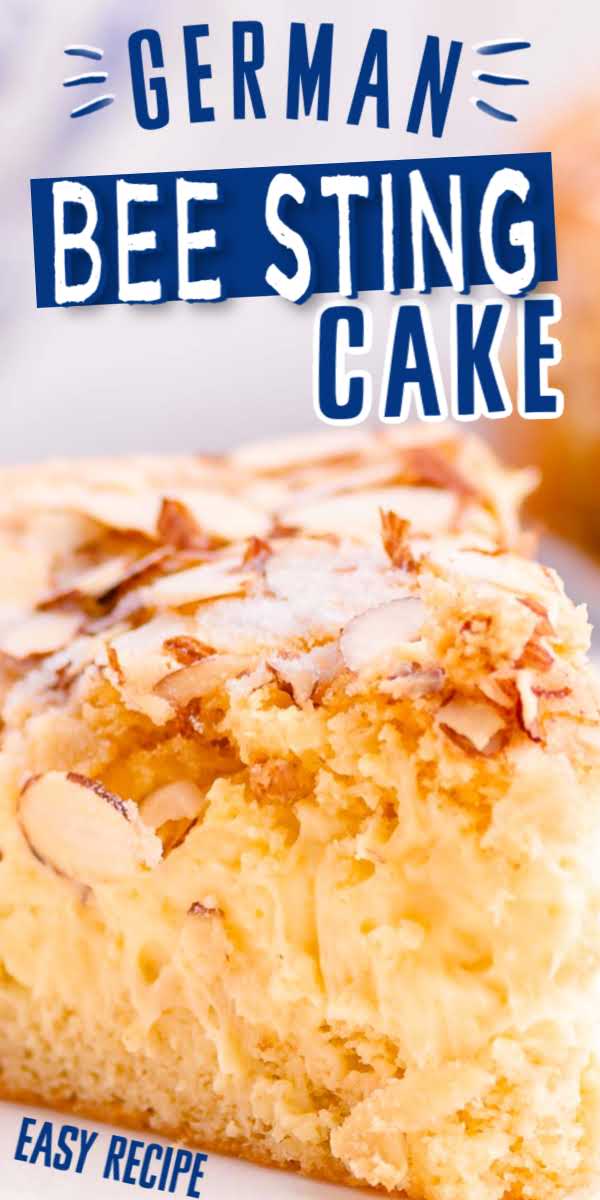 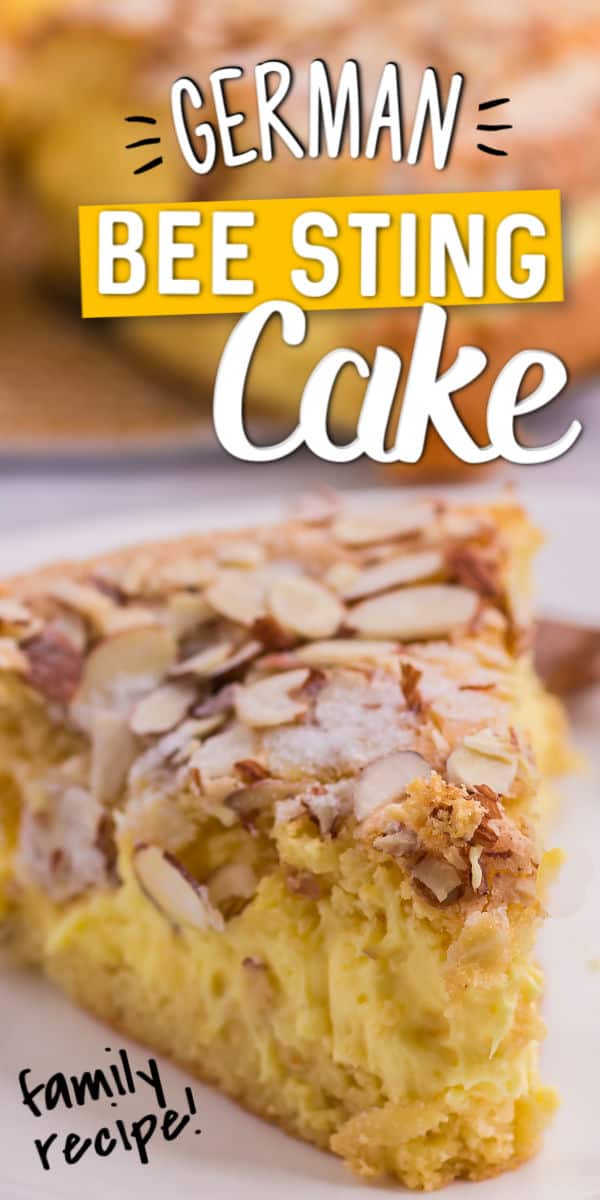 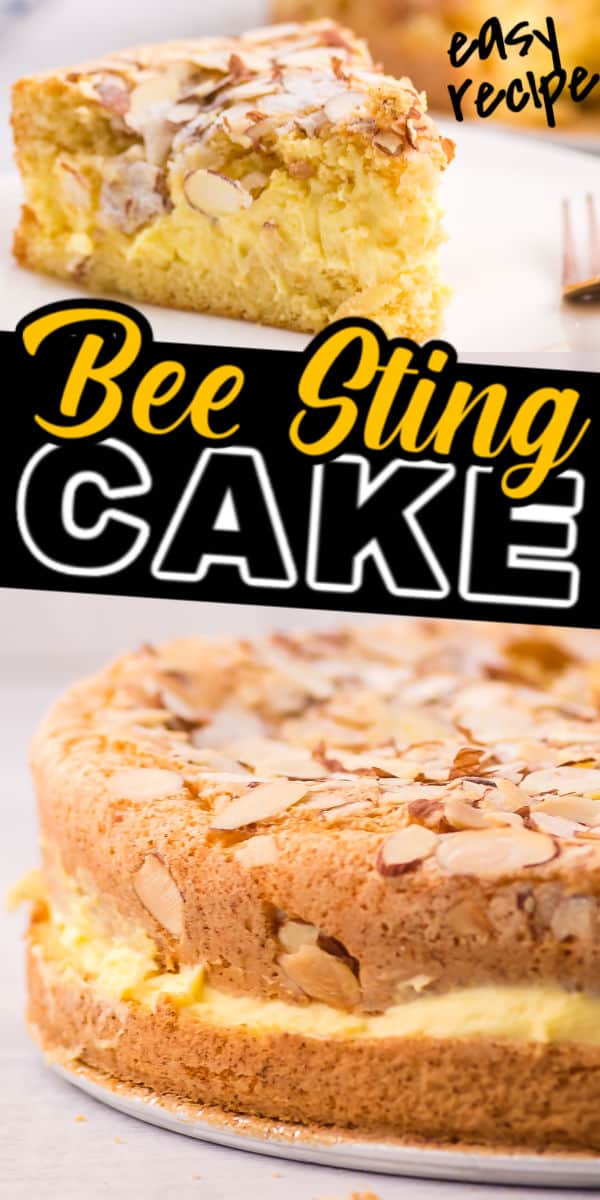 Bee Sting Cake is a German dessert cake recipe that has been a family favorite for as long as I can remember. It looks great, tastes even better, and is easy to make!

This Bee Sting Cake is made by baking the cake then slicing it in half to add a delicious vanilla pudding cream filling.

Bienenstich or ‘Bee Sting Cake’ is a popular, classic German dessert. Like German Cheesecake and Streuselkuchen, it is often served during ‘Kaffee und Kuchen‘ – Germany’s version of high tea.

This cake looks fancy but the recipe is really easy to make and perfect for new and seasoned bakers.

This might be the easiest bee sting recipe you’ll ever find.

It’s a really simple batter. No fussing with yeast for this one. You won’t believe how easy it is to make this decadently crunchy almond topping.

How To Make Bee Sting Cake

This recipe takes no time at all. The batter, filling, and topping take about 15 minutes to prepare and baking takes 30 minutes. And after the cake has cooled down it just takes a few minutes to put together.

PRO TIP: If you find that the filling has become too stiff whole milk in one tablespoon increments. The goal is to have a filling that is firm but easily spreadable.

Putting The Cake Together

Foodie Culture – Battle of the Bees

Bienenstich is the German word for ‘bee sting’. So how did a harmless and delicious cake get this name?

Legend has it that the name of this classic German dessert originated in the 15th century.

The name for this dessert is rooted in a taxation dispute between two German towns: Linz Am Rhein and Andernach. The residents of Andernach planned to settle matters with an attack on Linz. (I guess Germans took taxes seriously back then!)

On the morning of the planned attack two apprentice bakers went to the town walls to check on their beehives. The apprentices spotted the would-be attackers.

The quick-thinking apprentices took the beehives and threw them over the city walls at the invaders. The attackers had to flee. And the residents of Linz were able to successfully defend their city.

After the battle was won, the residents collected the honey from the beehives and decided to bake a celebratory cake. And that gave birth to the first Bee Sting Cake.

This is an easy version of a bee sting cake. Other recipes are based on a yeast dough and a caramelized honey-almond topping.

These recipes are also delicious but a lot more labor-intensive. Our version of the recipe is much easier and you don’t have to give up on taste or texture. And despite the omission of honey, it’s still considered a classic bee sting cake.

And when it’s served, this cake is a feast for the eyes too. 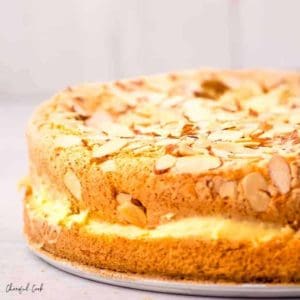 Putting The Cake Together

This recipe is hands down one of the easiest bee sting recipes. Other varieties of this recipe include a yeast dough and a more laborious honey-almond topping. Both types of recipes are great, but my family has always made and loved this easier version of the recipe. 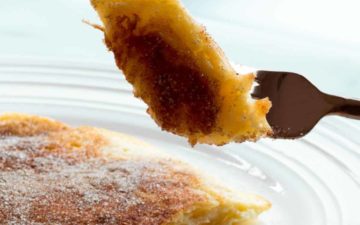 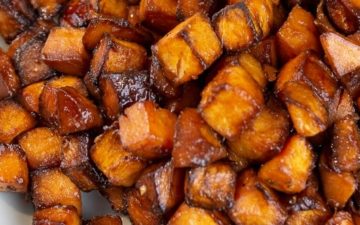