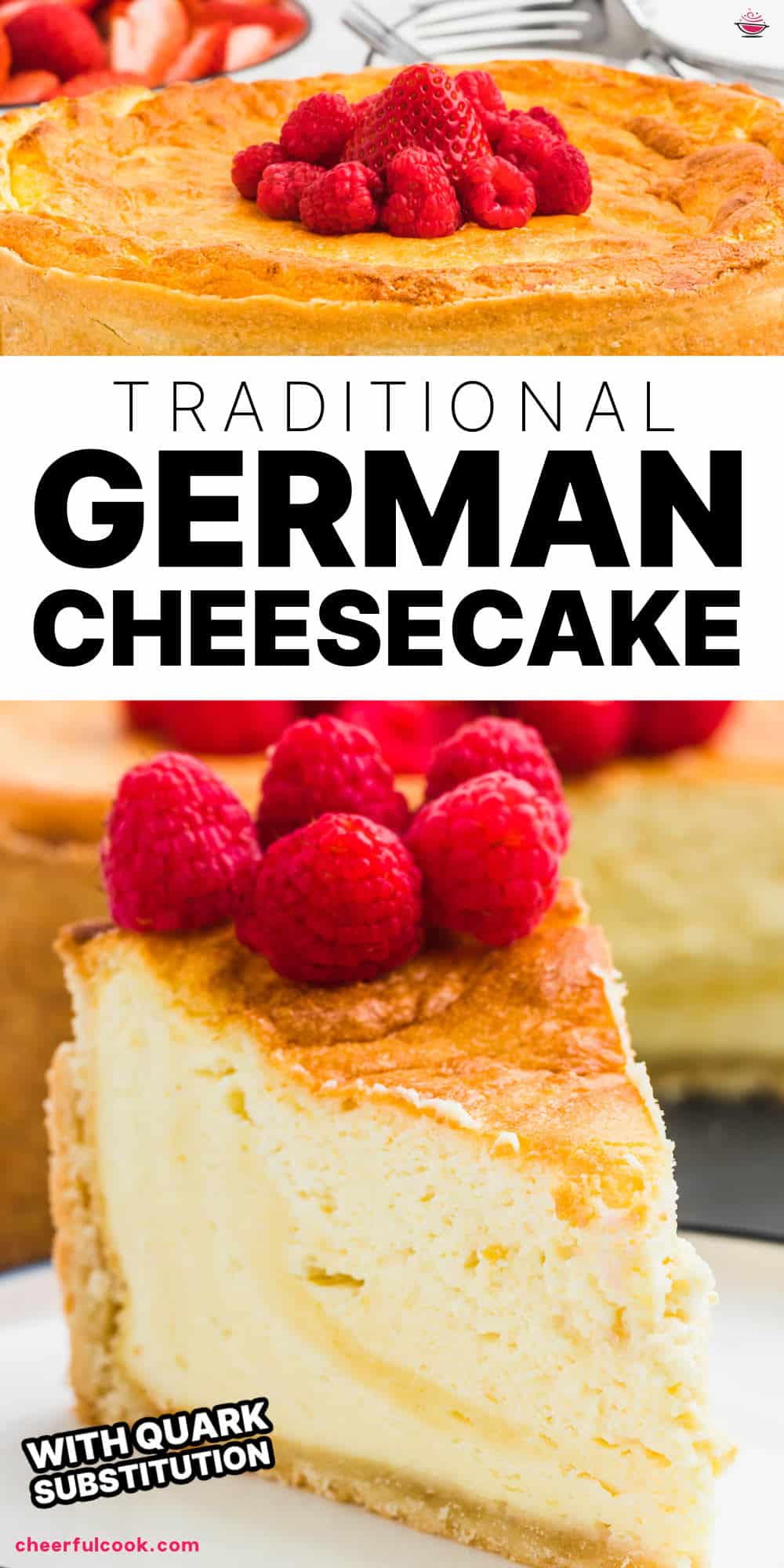 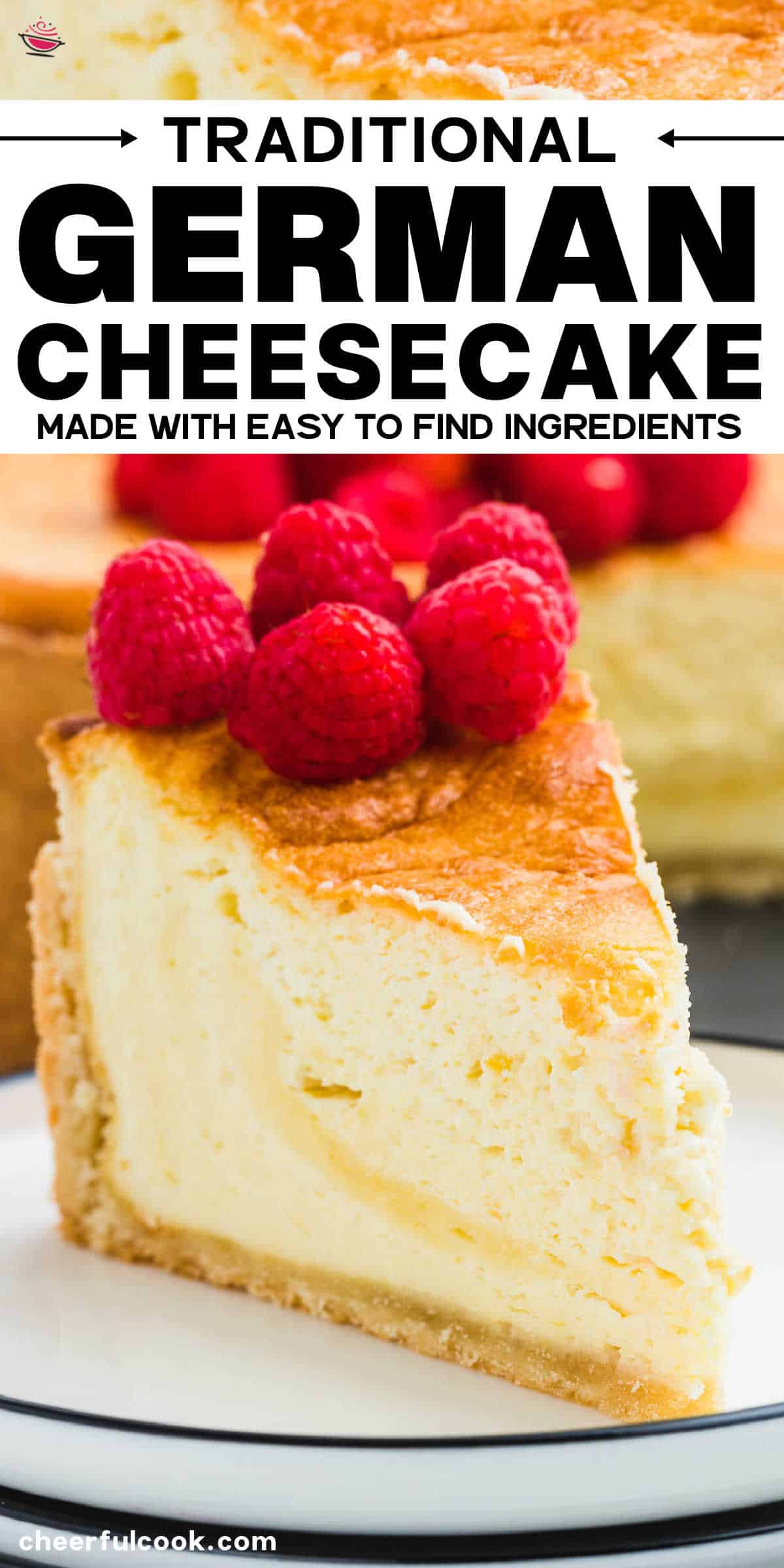 Our traditional German Cheesecake (Käsekuchen) has a crunchy crust and a rich, creamy filling that is full of sweet and tangy flavors and has a melt-in-your-mouth texture.

This recipe is a perfect example of how a few simple ingredients combined with a bit of time can take your baking to the next level.

So, come along as I show you how to make this German delicacy in your own kitchen.

Why This Recipe Works

TRADITIONAL - This is a traditional, slightly modified for the American market with easy-to-find ingredients.

TASTE AND TEXTURE - The crust has a buttery sweet flavor, and the filling is rich and creamy with sweet and tangy notes.

MAKE AHEAD - You can easily make the cheesecake a day in advance.

Please check the recipe card below for a detailed, printable ingredient list.

BUTTER - This is a classic German recipe, and that means we'll need butter. And quite a bit. All of the butter should be unsalted butter. For the shortcrust pastry, you need softened, room temperature butter. I recommend removing four sticks of butter from the fridge about an hour before you start baking.

EGGS - You'll need a total of seven eggs. However, you will only need the egg yolk for the crust. You can use the spare egg white for an omelet or save it for another dish. The remaining six eggs are for the filling. And you'll need to separate the egg yolks from the egg whites.

VANILLA - You'll need vanilla extract for both the filling and the crust. In Germany, we'd use vanilla sugar, but unlike in my Vanillakipferl Cookie recipe, you don't need to make an extra trip to buy

SUGAR - For the crust, I prefer confectioner's sugar (powdered sugar) which I quickly sift through a small sieve. For the filling, I prefer granulated sugar.

FLOUR - You'll need all-purpose flour for both the crust and the filling.

LEMON - One large lemon is perfect. I like to go with an organic lemon simply because we're going to use not just lemon juice but also lemon zest. But that's obviously optional. Conventional or organic, make sure you wash the lemon thoroughly before zesting.

BAKING POWDER - Will give our cheesecake filling a nice rise.

CORN STARCH - This helps to stabilize the filling.

SALT - I add about one-quarter of a teaspoon to the crust as well as the filling.

GREEK YOGURT - This is a key ingredient. Make sure to use 0% fat Greek Yogurt. I've linked to the brand I like best. I have a whole section further in the blog post where I go into more detail explaining why this is the best quark alternative.

But don't I need Quark?

So, let's address the elephant in the room. Some readers have pointed out that this recipe isn't a traditional German cheesecake because I am not using quark.

Yes, quark is an essential ingredient in German cheesecakes. That's true. It's an ingredient that's incredibly easy to find in Germany. Even the tiniest German supermarket will have several types of quark.

But unfortunately, quark is almost impossible to find in regular US grocery stores.

You can find sometimes find it in very select supermarkets but at outrageous prices. I've made and eaten German cheesecakes for decades, and there are a few workarounds.

METHOD 1 - First, you can make your own quark. It's not particularly hard. But it's time-consuming, and most of us don't have this kind of time.

METHOD 2 - Secondly, you could use sour cream, ricotta cheese, or cottage cheese. I've tried all of these in the past and have not been happy with the results. Some of them make very tasty cheesecakes. But they don't have the same taste/texture that you'll find in a traditional German Cheesecake.

BEST METHOD - The third and best option for us Americans is to use Greek Yogurt. Specifically, 0% fat Greek Yogurt. The brand I link to is the best substitution you will find. The taste and texture come so close to a German Cheesecake made with quark that you'll be hard-pressed to spot a difference.

Like milk in the US, quark comes in a lot of varieties full-fat, skim, 0% fat, and low-fat. In Germany, I'd use not just regular quark but something called "Magerquark" (0% quark) thus, I recommend choosing 0% fat Greek Yogurt.

BUTTERKUCHEN - This German cake is made with a rich blend of milk, sugar, yeast, eggs, and flour. The result is a melt-in-your-mouth delicious, light, and airy cake that's sweet and gooey.

To make this recipe, you will need to have the following tools on hand.

SPRINGFORM - You will need a springform for this cake recipe. I recommend a 10-inch springform. If you have a 9-inch springform, that's fine, too. But you might have a little bit of the filling left over.

MIXER - You can use a hand mixer or a stand mixer to make the filling. But you can also make this recipe without any mixers. Just keep in mind that it will take a while to beat the egg whites until they stiffen. So although our grandmothers might have done it by hand, I do recommend some kind of electric mixer.

ROLLING PIN - You will need this to roll out the dough for the crust.

How To Make A German Cheesecake

This is a summary overview of the recipe; for more detailed steps, please read the printable recipe card below.

The cake consists of two components: a pastry crust and cream filling.

FRIDGE - You can store freshly baked German Cheesecake for up to 4 days in the fridge. Make sure that you place the leftover pieces in an airtight container or a cake storage container.

This is important because this cheesecake will easily take on the fragrance of other items you might store in your fridge, such as garlic or onions.

Käsekuchen, or German Cheesecake, is one of the most famous German cakes.

If you visit Germany, you'll get to experience German bakeries. They are everywhere.

You'll often find two types of Käsekuchen on display: a plain one and one with raisins.

If you like raisins, add a cup to the filling before pouring it into the springform.

TIP: Sprinkle the raisins with a bit of flour before adding them to the filling. This will prevent the raisins from sinking to the bottom of the dough.

But when you're in that German bakery, you won't have to point to Käsekuchen silently!

German cheesecake (Käsekuchen) is a classic cheesecake recipe with a creamy filling and a golden brown crust.
Servings: 12 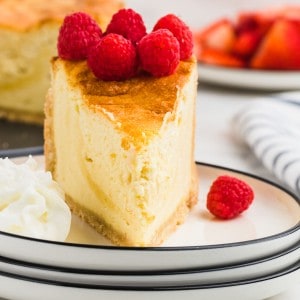 If the dough for the crust is too dry, add a few drops of water. 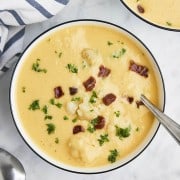 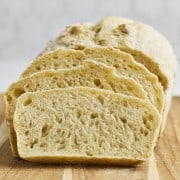 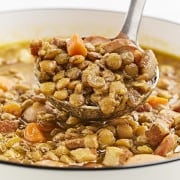 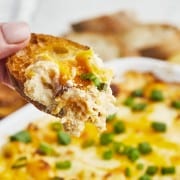