Frikadellen are tasty, hearty burger-like patties often served on a roll with a side of mustard and Potato or Cucumber Salad.

Frikadellen (also called ‘Bouletten’ or ‘Fleischpflanzerl’) are super quick and easy to prepare. Making this recipe comes down to combining and cooking meat, egg, bread, and spices.

You can have something new on the table in thirty minutes. And make extra because this is an incredibly versatile recipe that can be served up in lots of fun ways even as leftovers.

Frikadellen can be served sandwich-style, served as meatball appetizers, served on a roll with a side of mustard (which is a favorite German way to serve them) and even served as meatballs as part of the main dish.

They are a super-popular staple for German foodie culture. And this is an incredibly versatile recipe.

When it comes to the breading, I like to use a Kaiser roll. But you can substitute any bread roll or even slices of white bread.

If you’re talking to a German about how to make Frikadellen, you’ll probably hear him or her talk about Maggi.

Maggi is to Germany what HP Sauce is to Ireland or barbecue sauce is to the American south. It’s a staple that’s used in a variety of recipes and deeply intertwined with food culture.

While you can certainly find Maggi in the US, it’s not a staple. In my opinion, it’s not necessary to make great tasting Frikadellen. But I wanted to mention it in case you have a bottle of Maggi in your home, and always wondered what to do with it. 😉

Using the combination of soy sauce, salt, pepper, and smoked sweet paprika will give you similar results.

And you will find the smaller, meatball-sized Frikadellen on many German party buffet tables. And yes, Germans really love their condiments!

So don’t be surprised to find a bowl of mustard (and ketchup) right next to the plate of party Frikadellen.

How To Keep and Store Frikadellen

You can easily keep a batch of Frikadellen for 3-4 days in the fridge. But you can also easily freeze Frikadellen.

Once cooked, be sure to pat dry any excess fat and transfer the frikadellen into a freezer-friendly bag or container.

Ready to reheat? You can certainly reheat them in the microwave, on the stovetop, or even at low temperature (10-15 minutes at 250° Fahrenheit) in the oven.

While it might not sound appealing to everyone, I should mention that Frikadellen are served both hot and cold.

Although they are generally associated with traditional Northern German food. Denmark (which borders Germany to the north) has a very similar national recipe called ‘Frikadeller’.

But you’ll find pork or beef Frikadellen versions served throughout Germany in bars and restaurants.

This is an easy one. “Freak-a-dell-en”

Singular and Plural. A single meat patty is a ‘Frikadelle’. Two or more patties are ‘Frikadellen’. 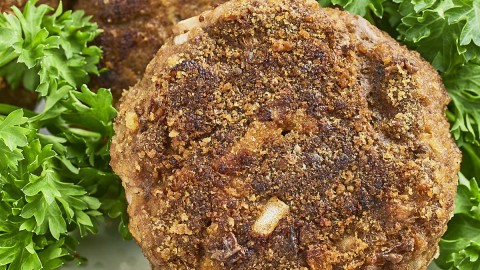 Nutrional information are based on larger shaped patties. If you decide to serve Frikadellen as bite-sized appetizers, you will get easily get 12-18 sized meatballs.